May 15 edited May 15 in NFL Talk
How Pete Carroll’s Seahawks defense is trying to catch up with the modern NFL
Diante Lee
May 13, 2022
48

Save Article
The Legion of Boom defined a generation of defensive football with a play style so ubiquitous that Pete Carroll created something usually reserved for the other side of the ball: an NFL coaching tree. From 2003 to 2014, Carroll’s defense led the way to two national titles at USC, a Super Bowl with the Seahawks and years of domination at both levels marked by the most punishing collection of players in football.

That’s why, during an offseason of big changes in Seattle, Carroll’s defensive staff shakeup is a significant acknowledgement of changing winds in today’s NFL.

Carroll’s famed style of play — a base four-down linemen system, with a healthy diet of single-high coverages (Cover 3 and Cover 1) — tries to deny anything in the middle of the field and trusts the best athletes on the perimeter to win their one-on-one matchups. In Cover 1, every defender sticks to their man. And in Cover 3, which is pictured below, defenders shrink and expand in their zones as routes distribute downfield. 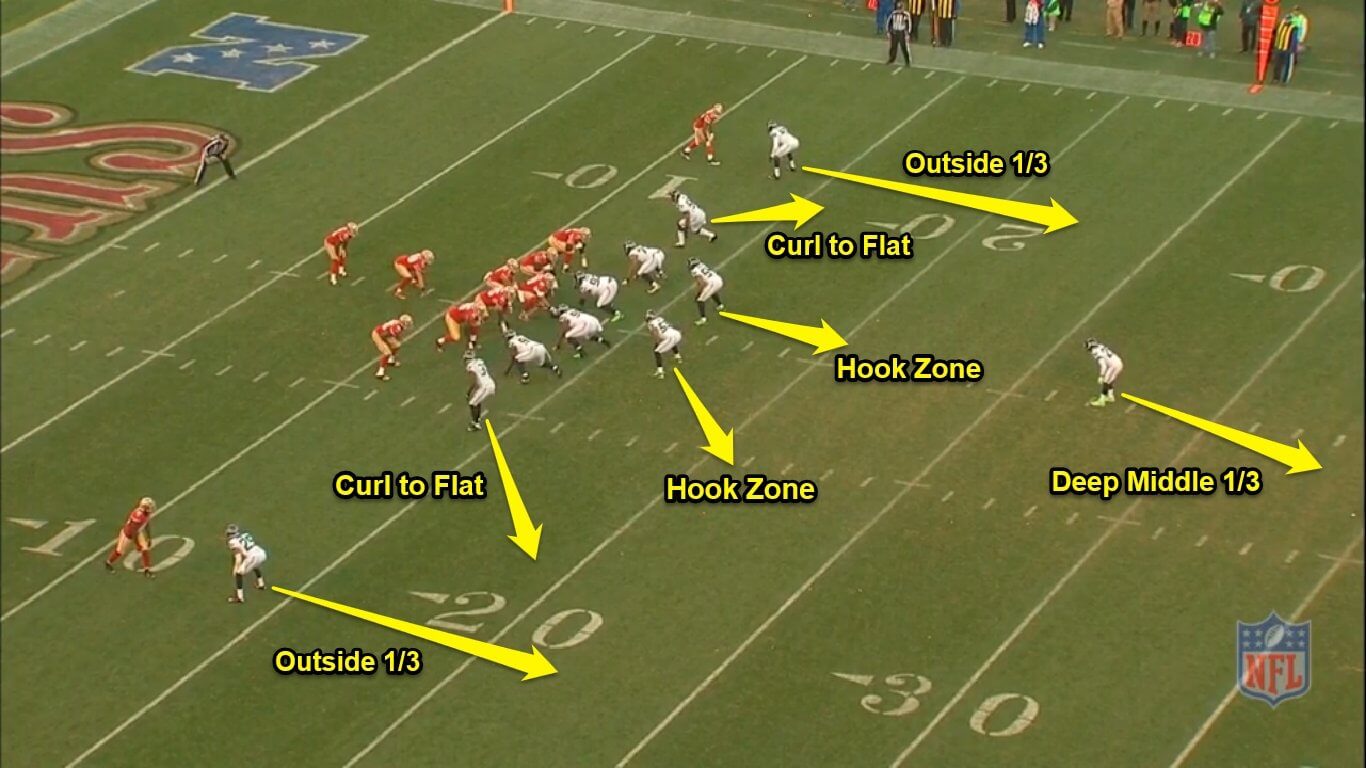 Football coaches like to say “coverage dictates the front.” In layman’s terms, the structure of a given coverage informs how many rushers a defense can have and what techniques the defense needs executed up front. In the NFL diagrams of single-high defense below, notice there are no notes or lines drawn for the defensive line. This means they’re able to play straight up, in what’s called one-gap defense — every player has one responsibility against the run or pass, and shrinking players’ focus enables all 11 to get to the ball or their coverage responsibility at full speed.

To thrive in this world of defense, coverage defenders need to win their individual matchups or have enough range in zone coverage to deny throws along the seams. Nearly a decade removed from the Seahawks winning a Super Bowl, it’s clear the elite talents of Richard Sherman, Bobby Wagner and Earl Thomas helped make the scheme iconic. But the framework that made it all possible comes back to Carroll, who used that defensive system to inform a unique approach to personnel management. The idea of the modern, long corner traces directly back to Carroll and general manager John Schneider, as do other height-weight-speed composite metrics used to identify the athletes needed to execute this system.

Yesterday’s successes will be today’s failures in the NFL, though. The defense that birthed and developed the Legion of Boom isn’t obsolete, but it cannot bear fruit on its own. The talent pool at wide receiver improves every year, and the spread of Carroll’s scheme led to every NFL offense developing their best Cover 3 and Cover 1 beater concepts while the Seahawks’ defensive stars began to atrophy. Seattle felt every effect firsthand: Following repeat Super Bowl appearances in 2013 and 2014, Seattle allowed eight or more yards per attempt in each of the next three seasons; more than 35% of attempted passes against the Seahawks have resulted in a first down every year since 2018; and the team’s defensive EPA per pass has fallen dramatically over that same stretch, according to TruMedia.

The NFL has been pass-first for a while, but teams responded to the Legion of Boom era with explosive-first football, looking to punish a defense as soon as the safeties roll into a single-high look. Compare any two-season sample of Seahawks football in the past seven years to 2013-2014, and you’ll find a staggering difference in the amount of 20-plus yard completions allowed. More often, teams began running receivers across the seams to stress underneath defenders, using play action to manufacture space in intermediate windows and aligning in 3×1 formations (like the right side of the diagram above) to attack mismatches in single coverage. It’s become less viable to line up every down in an “over” front (four down linemen who align to the tight end, as shown in the diagram above) and play Cover 3 and Cover 1 until the offense taps out.

Defenses have responded by reintroducing a method better suited to handle today’s game: the 3-4 defense, with more two-high safety looks. The thought leader of the NFL’s modern 3-4 scheme is former Broncos head coach Vic Fangio, whose coaching tree includes Chargers head coach Brandon Staley and Packers defensive coordinator Joe Barry. Fangio uses the odd front to stop the run on the interior and outside linebackers to control the edge while inside linebackers work in tandem with safeties to handle any potential play action throws or dropback passes. Even in the nickel/sub packages, Fangio’s defense keeps its edge defenders aligned outside of the tackle and its safeties deep. By aligning this way, his defense stays true to its commitment to controlling the edges with outside linebackers, instead of rolling a safety down in run support.

Compare the pictures below, from Fangio’s time as defensive coordinator in Chicago, to the images we’ve covered earlier. The still images alone reflect a clear philosophical difference between Fangio and Carroll.
0 · Share on TwitterShare on Facebook