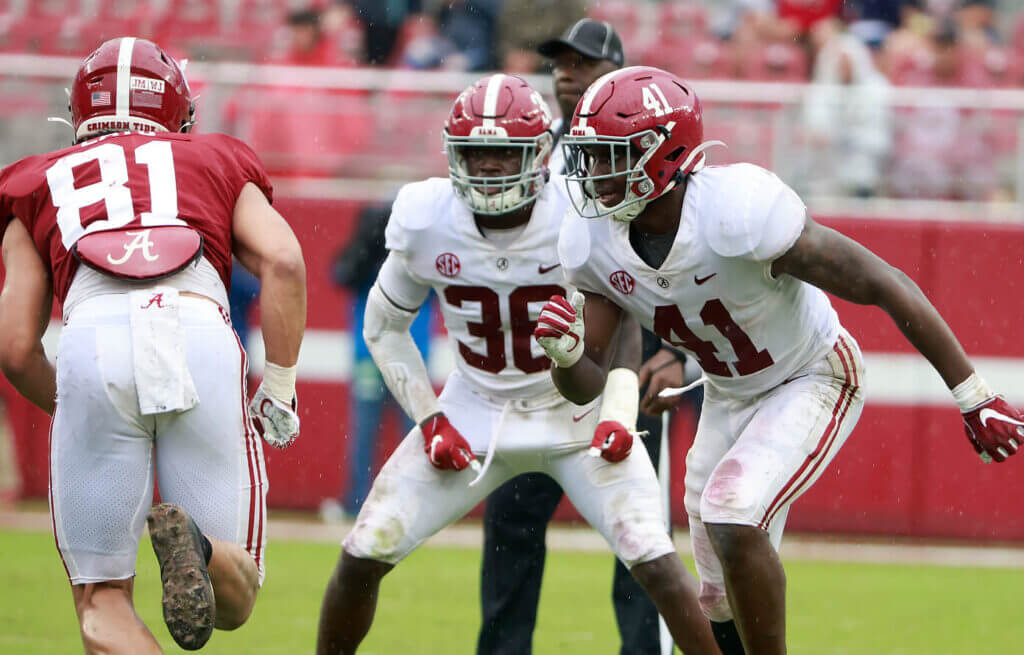 TUSCALOOSA, Ala. — Chalk one up for Alabama’s first-team defense over the first-team offense.

If we’re being honest, the entire offensive line should buy its starting quarterback a steak instead of the beans he’ll get as a part of the losing A-Day team. Heisman Trophy talent doesn’t matter when the five players up front couldn’t block we’ll enough to give Young and the Crimson a chance in the White team’s 25-7 win in Saturday afternoon’s annual spring scrimmage at Bryant-Denny Stadium.

The first-team defense, led by pass-rush specialists Will Anderson, Dallas Turner and Chris Braswell, had its way with a patchwork offensive line that was missing two starters (Emil Ekiyor and Darrian Dalcourt) and continues to have issues at the tackle spot with Evan Neal off to the NFL. Young was harassed all afternoon to the point where head coach Nick Saban removed Anderson from the field so the first-team offense could actually have a chance to compete.

It wasn’t a coincidence that the only White team touchdown came when Anderson was on the sideline and Georgia Tech transfer Jahmyr Gibbs took it down the left hash for a 75-yard score. Those 75 yards represented 37 percent of the total yardage for the starting offense.

This leads to the glass half-full or half-empty argument. Was Alabama’s starting offense that average or was the starting defense that outstanding? It’s an oft-asked query when a team’s starting units square off. It’s not all good or all bad, but one certainly seems more bankable than the other. This defense is pretty stout.

Anderson is the best player in college football, and Turner seems a lot more comfortable and secure in his place on this team. What could add more nightmares to opposing offenses is what Saban revealed during the streamed broadcast of the game when he told ESPN color commentator Matt Stinchcomb that Braswell is a talented pass rusher too and the defense has packages where all three are on the field at the same time. They sacked Young a combined seven times Saturday.

Saban said he views Braswell as a starter too, along with Anderson and Turner.

“Probably the one thing that impacted the game as much as anything was the front seven on defense,” Saban said. “They’re further ahead of the offense line, with two starters out, only one starter back from last year.”

In total, Young was sacked 10 times and completed 14-of-29 passes for 153 yards with an interception. He had no chance to sustain any offense because the offensive line simply couldn’t keep the pass rushers out of the backfield. It should be noted that A-Day rules require quarterbacks to be in a black, non-contact jersey, meaning that it’s essentially two-hand touch. But the point remains: The offensive line play was rough.

“A lot of inexperienced players playing positions against guys who are pretty good players that are pretty good rushers,” Saban said. “That probably impacted the game a little bit. We’ll certainly try to improve that. I think we have. We’ll do it in recruiting. We’ll do it any way we can.”

That doesn’t exactly sound like a coach thrilled with the prospects of the immediate future of the offensive line. But Ekiyor and Dalcourt will return and recent Vanderbilt transfer Tyler Steen will join the group soon to interject further competition into the unit.

Saban did note that because of the realities of keeping things simple for a spring game and not showing too much to future competitors, the offensive game plan was kept simple, so the team couldn’t chip or help its tackles in any way. That would certainly have helped Saturday.