Is LSU football focusing too much on out-of-state recruits? 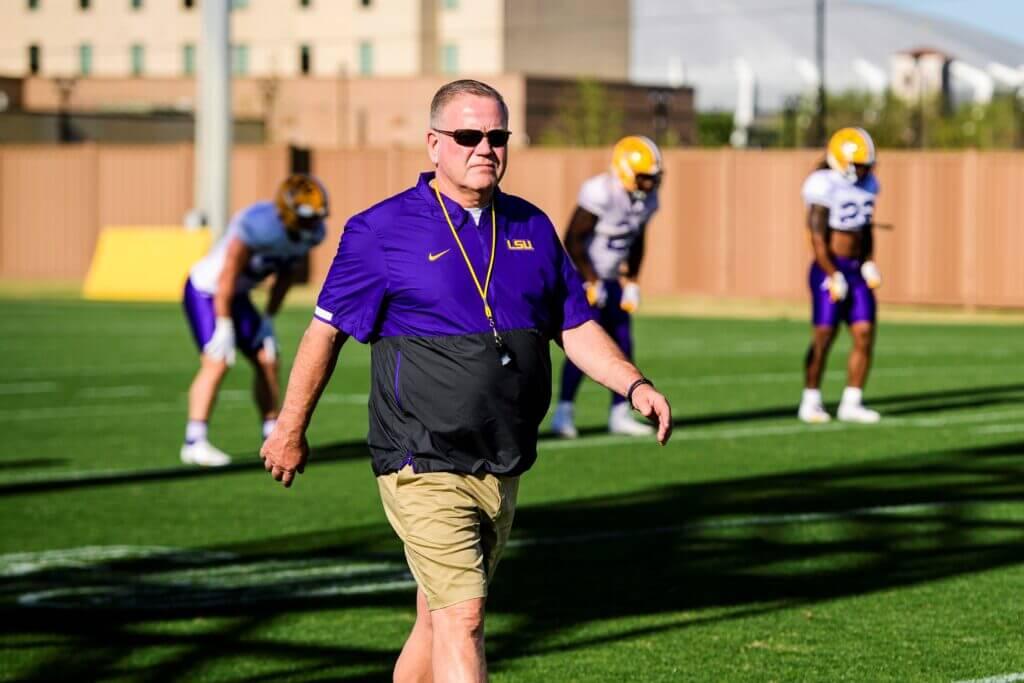 Is it my imagination or does it “appear” that Kelly is recruiting on a national scale while ignoring the Louisiana kids, thus allowing the Texas A&M’s & Bama’s to cherry-pick because of in-attention?

Walter’s use of quotation marks around “appear” are likely accurate here. By no means do I think LSU is focusing more on national prospects and ignoring Louisiana kids. It’s likely safe to say Louisiana is where most of the staff’s focus has been. But I understand where the concern is coming from, as the everyday news most are reading involves top quarterbacks likely leaving the state for SEC rivals and LSU pursuing big-name out-of-state targets. Four of LSU’s five current commits are from Missouri, California, Texas and Georgia. And LSU is in the midst of some challenging battles for the top Louisiana kids.

To the question, though, we don’t live in a world where you’ll see constant headlines proclaiming “LSU is still in OK shape with X recruit.” So I think you’re right that it’s more about appearance than hard reality. LSU is recruiting these names hard, and it hired several good Louisiana recruiters like Frank Wilson, Joe Sloan, Brad Davis, Cortez Hankton and so on. But Walter isn’t wrong that LSU is facing a second consecutive cycle in which it could miss on several notable in-state prospects (or it might not!). It entered the spring with ground to make up with several players. The exhausting part is the nuances of how much that should be held against them.

Consider the two elite in-state quarterbacks — Arch Manning and Eli Holstein. Neither was ever considered likely to go to LSU, going as far back as the peak of the Ed Orgeron era. Manning was always a tough get, and Holstein was a longtime Texas A&M commit who never figured to follow LSU’s Walker Howard, a teammate of his at St. Thomas More High School before he transferred to nearby Zachary. If anything, Kelly and LSU quarterbacks coach Joe Sloan have done a great job of making up ground with the two and building a relationship. Holstein visited LSU twice this spring and Manning was at the 7-on-7 camp this month. So those are examples of situations in which you’ll see big-name stars leaving the state but it doesn’t quite fall on the Kelly regime.

But LSU has put itself in good shape with many of the top players who have yet to commit. Five-star receiver Shelton Sampson Jr. (Baton Rouge) will be key. Every major program will be competing for him, but LSU is in as good a position as anyone. The two major offensive tackles — Zalance Heard (Monroe, La.) and Tyree Adams (New Orleans) — both have LSU as top contenders, if not frontrunners. LSU has major work to do with four-star defensive backs Derek Williams and Jordan Matthews, but the Tigers have put themselves in the mix in recent weeks. And they’re considered frontrunners for four-star safety Kylin Jackson. Four-star receiver Omarion Miller decommitted from LSU and is being heavily recruited by former LSU coach Mickey Joseph at Nebraska, but LSU also isn’t going anywhere with him. He was just on campus this past weekend. And of course, LSU has a commitment from four-star running back Trey Holly.

Point being, LSU is working Louisiana hard and making up ground. It should be in position to still have a good year. If it misses on half, then we can have those tough conversations. As for the national recruiting, I would just remind people that they are recruiting many national players who staffers already had relationships with during their previous jobs. That’s a good thing. For example, defensive line coach Jamar Cain was recruiting nationally at Oklahoma and developed major relationships, so LSU is in the mix for several national linemen. Mike Denbrock and Robert Steeples were able to land a top-150 tight end from St. Louis in Mac Markway, in part thanks to Steeples’ relationship with him from De Smet High. And Sloan is getting LSU in the mix with top-tier national quarterbacks like Dante Moore and Jaden Rashada because LSU knew it was behind on Manning and Holstein. These are positives.
0 · Share on TwitterShare on Facebook