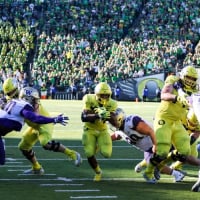 Thibodeaux and Wright were named first-team all-Pac-12, center Alex Forsyth and cornerback Deommodore Lenoir were named to the second team and linebacker Noah Sewell was named the Defensive Freshman of the Year in the conference.

Thibodeaux has 32 tackles with 7.5 for loss including three sacks and was named MVP of the Pac-12 Championship game. In his first year as a starter, Wright has 22 tackles with eight pass breakups.


Lenoir has 24 tackles with an interception and forced fumble.

Sewell leads all Pac-12 freshmen in tackles (38) and tackles for loss (five). He is one of just two UO freshmen since 200 to have double-digit tackles and at least two tackles for loss in a game, matching Troy Dye.

It’s the second straight year a Duck has earned the Defensive Freshman of the Year honor, with Thibodeaux winning it last year.

Sewell started off his collegiate career strongly by recording four-or-more tackles and a tackle for loss in four of his first five games to go along with a pair of sacks and a forced fumble.-Oregonian
0 · Share on TwitterShare on Facebook